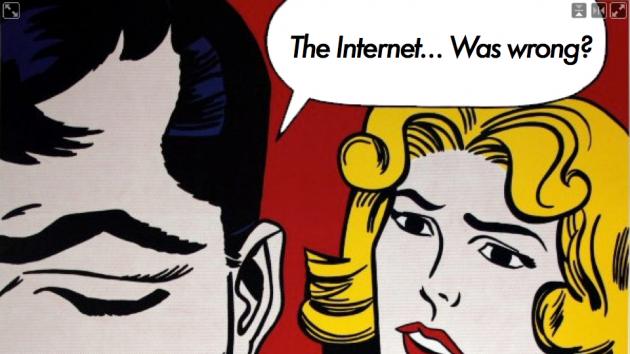 Bad news for online dating goers. According to Smart Scientists its all a bunch of hocus pocus. The good news is it still sort of works by accident, and might cause sex!

The new study, reviewed an enormous body of evidence as to what makes us want to hook up with a person we've never seen before in real life. From the journal Psychological Science in the Public Interest:

The heavy emphasis on profile browsing at most dating sites has considerable downsides, and there is little reason to believe that current compatibility algorithms are especially effective.
So the percentage next to a potential candidate could actually mean nothing, or at least something but its not anything important.

Compatibility of their personality or values cannot be evaluated meaningfully because it omits information about which personality traits or values are considered and assessed, which are given greater or lesser weight, and how compatibility is established
And since we're all human, and we succumb to what we feel at the moment is best, software may not be as smart as we thought it'd be to hook us up with someone.

Compatibility of [one's] personality or values cannot be evaluated meaningfully because it omits information about which personality traits or values are considered and assessed, which are given greater or lesser weight, and how compatibility is established
...

Because human beings are complicated and multifaceted, two individuals who resemble each other in one way (e.g., they both love big parties) are unlikely to resemble each other in every way (political conservatism, a taste for Ethiopian food, ethnic background, openness to new experiences, etc.). The idea that similarity in general may facilitate successful relationships says nothing at all about which dimensions of similarity should be favored over others. In the absence of a clear theoretical direction, research on the implications of similarity has examined many possible ways that partners can be similar, obtaining varying results for different types of similarity.
Knowing that a person who is White, college educated, and Catholic is likely to be happier with another person who is White, college educated, and Catholic still leaves an unmanageable number of partners from which to choose.
And to continue, we get a slap in the face of facts with this:


Encountering potential partners via online dating profiles reduces three-dimensional people to two dimensional displays of information, and these displays fail to capture those experiential aspects of social interaction that are essential to evaluating one's compatibility with potential partners. In addition, the ready access to a large pool of potential partners can elicit an evaluative, assessment-oriented mindset that leads online daters to objectify potential partners and might even undermine their willingness to commit to one of them.
The study concludes, that at the very least you might still be able to find true love, just by sheer volume. But isn't that the same in real life?

All other things being equal, having access to many potential partners is better than having access to few or none. Being able to communicate with potential partners safely and conveniently offers an attractive precursor to face-to-face encounters with complete strangers. Confidence that particularly poor relationship partners have been weeded out of the dating pool is an appealing prospect. In short, the potential of online dating to improve the process of finding and securing a satisfying, committed romantic relationship is great.
But don't be discouraged. Go out. Have fun. Meet people. Socialize. Check out the Hily.com review for some tips. It'll do wonders. Maybe its time we gave the internet a break every once in a while. [Online Dating via BusinessWeek via Dave Pell]